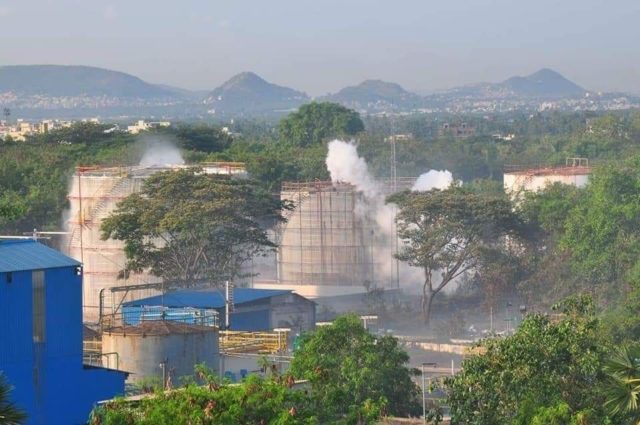 Dr EAS Sarma, former secretary, the Government of India addressed a letter to Y.S.Jagan Mohan Reddy, Chief Minister, Andhra Pradesh, on May 7, 2020, regarding: “On a serious leakage of toxic gases at the manufacturing site of LG Polymers in Venkatapuram village near Pendurthi on the outskirts of Vizag.”

The letter is cryptic and apt. The chemical plant at Venkatapuram village was established in 1961 as Hindustan Polymers. It manufactures polystyrene and its co-polymer products as well as engineers plastic compounds.

In 1978, it was merged with McDowell & Co. and later, was taken over by South Korea-based LG Chem, which renamed it as LG Polymers India in 1997.

It got “Consent for Operation (CFO) around the beginning of 2019 for the unit’s expansion”. How do we compromise with the Spirit of Swadeshi and Make In India with continuous promotion and patronage for Foreign Direct Investment? (FDI).

This is all in the name of Globalisation and at the cost of the local Cottage and Village Industries. Cannot we live without Plastic? By no stretch of the imagination, a plastic manufacturing unit like this can be called “essential”.

The Party in power and the opposition have started mutual accusations. For a moment let us consider that the flaw exists in the licencing, granted by the previous Governments.

Nothing prevents the present Government from reviewing the licence issued by the previous ones. Since Vizag city is a major port, housing  a steel plant and the  Headquarters of the Eastern Naval Command, the Central govt is also expected to chip in to safeguard the city from the national perspective.

“Please fix responsibility on Andhra Pradesh Pollution Control Board (APPCB) and the officers of the industrial safety wing for allowing such an industrial unit to expand operations and resume manufacturing.

Nation, Country, State does not mean the barren land. It means People. Hope the Commissions/ Committees appointed by the National Green Tribunal and the Govt of AP, the National Human Rights Commission as well as the High Court of A.P. will fix the responsibility on the individuals at the relevant times.

Otherwise as usual in many such tragedies of this magnitude, only a few watchmen or lower rung officials or clerks are made scapegoats, and the top bosses are not held accountable for the lapses.

In the instant case, the law must be set in motion. Responsibility must be fixed, as per the statue on the individuals in the APPCB or the Central and the State Governments however big they are.

Action must be taken without fear or favour. Otherwise, the very foundation of the Democracy, Rule of Law is at stake and the people’s confidence in the Governments, which is already shaken will further deteriorate.

“It is ironic that both the Centre and the State should jointly encourage activities such as liquor sales and industrial pollution that weaken human immunity at a time when the country is facing an unprecedented crisis due to Coronavirus spread”.

Almost all the national and international agencies concerned with the health have categorically stated that the income derived through tax from liquor and tobacco and their products and by-products is far less than what the Governments spend on the ill effects of their consumption.

At least five percent of the population depends exclusively on restaurants and hotels for their food and beverages. They are prohibited from functioning. Places of worship are closed. Devotees are directed to worship at home. Festivals are cancelled. It is also understandable that vegetables and groceries can be sold during restricted hours.

Whereas the Liquor can be sold during the whole day; from 9.00 am. to 7.00 p.m. The queue lines have proved that it is a clear violation of Social Distance norms.

Chief minister  Jaganmohan Reddy has announced an ex-gratia of Rs One Crore to those dead and lakhs for the victims, free Medical aid, either in govt hospitals or in any private nursing homes and Rs.10,000/- to about 15,000 affected neighbours. Compensation was also announced to the domestic animals. Ultimately it may amount to more than a hundred crores.

How much tax the LG Polymers might have paid?

Was the litigation pursued seriously and in good earnest to the logical end? Is the country benefited? Have the people gained? Has society earned equal resources, if not more?

Usually, the gas-based industry is classified as Hazardous. How the local authorities allowed residential localities to grow around the LG Polymers? It should have been mandated to maintain a green belt around its premises. Why so much of negligence?

Thanks to the 1971 Bangladesh war! Visakhapatnam, the headquarters of the Eastern Naval Command was strengthened to meet any eventualities.

Many emergency relief arrangements are at the disposal of the administration. Belabored, owing to Caronavirus the police did not brook any delay in responding to the call of the duty. Causalities and sufferings were minimised.

The accident raises many embarrassing questions!. But for the coronavirus shocking, the people and the opposition would have been up in arms against the govt. This must serve as an eye-opener for the Central and all the State Governments.