Hyderabad, November 30, 2020: AICC Spokesperson Dr Sravan Dasoju fired the State Election Commissioner (SEC) for conducting the GHMC elections in a most fraudulent way by violating every rule of the constitution. According to him, being an IAS officer who is supposed to be the custodian of constitution and democracy, however, the SEC is letting it die in the hands of KCR and the TRS party. ‘SEC is simply acting as a slave of KCR and following the instructions of his king’, he slammed. The senior Congress Party leader said that the SEC and the police department have colluded with the ruling TRS party and openly murdered democracy. The police force has become a muted spectator while huge money is being distributed to the voters in the GHMC area by the TRS leaders, he criticized. 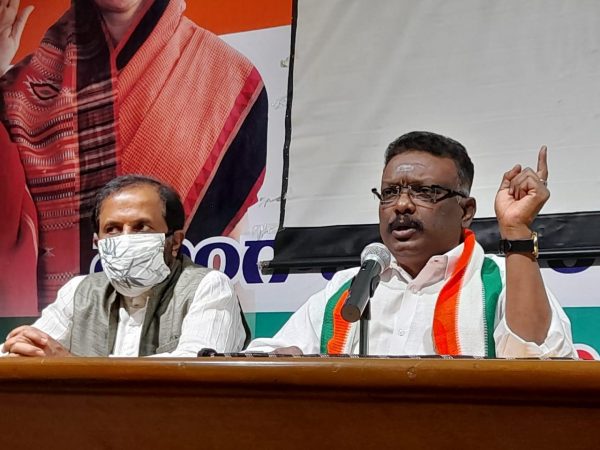 “Like a locust gang, the TRS cadres have started distributing money to voters in an organized crime format and that too in the presence of police. With the support of looted money from flood relief funds, the TRS party leaders have been distributing Rs 5,000 per vote in the GHMC area for the last 24 hours. They first cut power supply in a street and distribute money and go away like thieves”, he explained.

Dr Sravan Dasoju along with former Congress Party MP Madhu Yashki Goud addressed the media at Gandhi Bhavan on Monday. “Ever since the announcement of the GHMC elections, the SEC has not been following any rules as per the constitution. He dumped every section in the dust bin and simply followed the instructions of KCR to conduct the elections. Instead of conducting them fraudulently, you can simply cancel the elections and auction the wards. As desired by you, then you can announce that only TRS and MIM Candidates won the elections. Why are you making dramas, shame on you”, Dr Sravan slammed.

“We were wondering why Naxalites used to boycott the elections by terming them fake and dubious. As strong believers in democracy, we thought that they should have faith in democracy. But, going by the current circumstances and the whole process is being followed in GHMC elections, we are now thinking that they might be right”, he added.

The AICC leader presented a few video clip of evidence to the media in which TRS leaders were seen distributing money to the voters. “I ask the DGP Mahendar Reddy and the CP Anjan Kumar. Can’t you see what is happening in Hyderabad? Where did your 48,000 police force go? Have you found the money only in Dubbaka elections, not elsewhere?”, Dr Sravan questioned.

According to him, KCR looked like a rope in the beginning but he has become an Anaconda to eat and loot Telangana. Therefore, it should be killed to save the home. “It is high time to kill Anaconda in a democratic way by casting your valuable vote against KCR and the TRS party”, Dr Sravan appealed to the people of GHMC. He requested them to vote for Congress Party and save democracy in the state.

Dr Sravan Dasoju while appreciating the cadres for putting tireless efforts and fighting like warriors in this election, asked them to kill the Anaconda. “Don’t look for any instructions to come from the high command or any form of support from your leader. You must become a volunteer to stop the violations. If a snake is entered into the house, we don’t look for anybody to guide or support us. We simply take a stick and hit it hard until the snake is dead”, he motivated them.