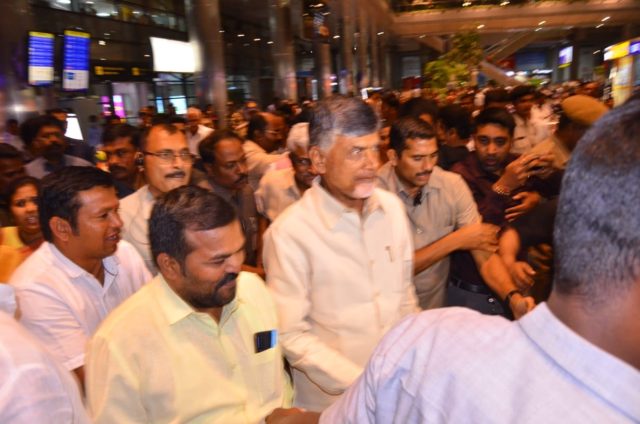 In what is seen as a repeat of history, TDP supremo, and Opposition leader Chandrababu Naidu was finally flown back home from Vizag following a scuffle between TDP and YSRC workers near Vizag airport.

Naidu was to participate in the two-day Praja Chaitanya Yatra in North Andhra and it was Naidu’s first tour in the region after the state government’s announcement of three capitals. But the attempt was foiled by YSRC workers, who created chaos at the airport raising slogans against Naidu which finally led to his detention.

YSRC workers stopped Naidu’s yatra stating that he was opposed to making Vizag as executive capital of the state, They said he owed an explanation for the people of Visakhapatnam on his opposition to Vizag as the executive capital. They shouted slogans like ” Naidu go back” and “Uttarandhra Drohi Naidu”.

Naidu, though participated in the ‘Save Amaravati’ agitation at Vijayawada, had never bothered to tour the state to convince the people on the need to continue Amaravati as the capital. He knows very well that opposing the three-capital concept is a regionally sensitive issue and any talk against the Vizag as executive capital would hurt the regional sentiments.

He, however, decided to tour the area on the pretext of meeting the farmers, who lost their lands to Jagan’s ambitious Pedalandariki Illu scheme. He was to interact with farmers at Pendurthi in Vizianagaram district.  The government has taken back the lands under the occupation of the poor for the scheme.  The program rendered thousands of farmers mostly Dalits, who have been waiting for the regularisation of their lands, landless.

TDP supporters who arrived at the airport to receive Naidu confronted with YSRC workers who could reach the airport despite police restrictions. This led to tension in the area. YSRC workers pelted chappals, eggs and water bottles at Naidu convoy. Unfazed Naidu insisted that he be allowed to go to Vizianagaram as he had permission for the Yatra. He got stranded in the crowd for over two hours. Later Naidu got off the vehicle to go on foot. The police did not allow him and confined him to the vehicle. Around 3 pm he was taken back to the airport’s lounge after taking him into preventive custody him under section 151 of the CRPC. Incidentally, the same drama happened on January 26, 2017, when the then opposition leader YS Jagan had tried to enter Vizag to participate in a protest rally. Jagan was disallowed, taken into preventive custody and flown back home following a similar confrontation between workers of the ruling TDP and Opposition YSRC.

Following the stand-off between TDP and YSRC workers, Naidu was taken into preventive custody and flown t Hyderabad. The police said that the tour would not be allowed due to law and order issues.

Angered at Police decision Naidu shouted at the police to encounter him on the spot.