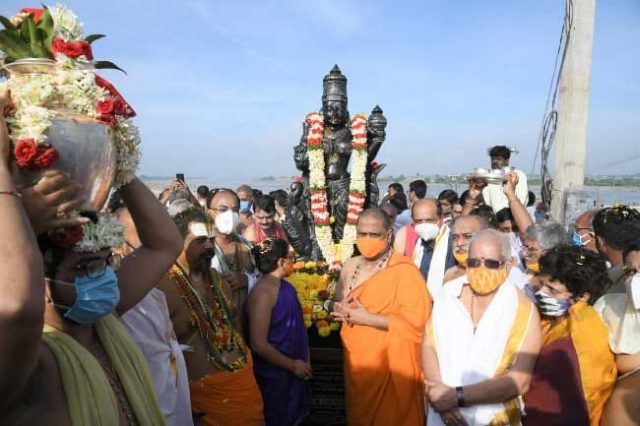 Tungabhadra Pushkaralu, which visit once in 12 years, have been celebrated with all religious fervor despite the corona pandemic in last November.

In fairness, the Govt and the NGOs have made satisfactory arrangements. No untoward incidents were reported. Due to Covid the number of persons visited was comparatively less. Rituals were restricted to the age group, between 11 and 59 and due to pollution, the holy dip was prohibited. However, there were instances of violations.  This article is not to stress the religious aspect, but to emphasise the worldly aspects, which are necessary to follow the religious code.

Except for a few lakes, almost all other sources of water are the gift of nature. Their utility, from ages immemorial to the present day, is part of human history.

Tunga and Bhadra rise at Gangamoola in Varahaparvata of Western Ghats in Mudigere Taluk, Chikkamagalur Dist, Karnataka at an elevation of  4,781 ft.  With about 70 Tributaries, Bhadra 174 km and Tunga 147 km with about 60 tributaries, meander through the Westerns ghats, Malanadu and join at Kudligi, 15 K.Ms from Shivamogga City to form Tungabhadra.

From Kudligi, Tungabhadra, with its major tributaries, Varada 220 km Kumaudvathi and Vedavathi or Hagari, 391 km enter Andhra Pradesh at Meliganur (Handri with 100 km joins at Kurnool) and on the other side, Telangana, traverse 531 km and mingle with the Krishna at Gondimalla in Gadwal Dist. Telangana, about 40 km from Kurnool.  Tungabhadra water is so sweet, so goes the adage; Bath in the Ganga, drink Tunga. (గంగా స్నాన, తుంగా పాన – ಗಂಗಾ ಸ್ನಾನ, ತುಂಗಾ ಪಾನ). The total catchment area of the entire river basin is 69,552 sq. k.m.

Sringeri, Hariharapura, Teerthamuttur, Ardikoppa, Bheemanakatte, Teerethahalli, Balegaru, Mahishi, Virupaksha are the important religious centres on the banks of Tunga. Several legends are told about the fame of Sringeri, where Adisankaa established Saradamba Temple, the Goddess of Learning. On the banks of the Bhadra, Kalasa, Agasthya Kshethra, Somapura, Khandya, Hebbe, Rambhapuri Matha of the Veera Saiva Order, a Jain Temple at Narasimharajapura are the attractions.

The Vidyashankara temple at Sringeri, constructed in (1338)  in Hoysala and Vijayanagara style by Harihara and Bukka, the brothers who founded the Vijayanagara Empire, was a tribute of Sri Vidyaranya.

Another construction that is worth noting here is the flood protection walls constructed, starting from Sringeri up to Kurnool all along rivers, wherever there are possibilities of erosion. Though there is no definite Archaeological evidence, it was supposed to have been constructed between 1525 and 1527 by Srikrishna Devaraya. On 2nd Oct 2009, about Ten lakhs Cusecs of water has flown for more than 48 hours in Tungabhadra. Not a single stone was disturbed. That is the architectural marvel of Vijayanagara. Someswara Temple at  Somapura was built in Hoysala style.  Markandeswara at Khandya, Bhima Sankara at Hebbe and Bheemalingeswara at Kudali in are in Vijayanagara style. There is a huge rock known as Rudrapada at Bhimagundi near Kalasa.   At Bhadravathi, “There are the remains of a fine triple temple of Narasimha, of the early Vijayanagara period, never finished.”  The Harihareshwara Temple of Harihara, at  Harihar was built in c. 1223–1224 CE.

Rambapuri Matha, in honour of Renukacharya at Balehonnur, is the oldest among the Panch Peethas of the Veerashaivas. At Teerthahalli in the midst of the river, on the rock beds, obsequies are offered to the ancestors. At Kudligi the confluence of the Tunga and the Bhadra, there are two centres of Dvaita and Advaitha schools of thought and philosophy. 40 km downstream of Kudligi at Honnali, Raghavendraswamy himself established a Mutha. 100 km further down at Hosaritti in Haveri District is an important Raghavendra Swamy Mutt. The present Pontiff of Mantralayam Sri Subudhendra Teertha Swamiji was initiated into Sanyasa here. The Seventeenth-Century Wooden Palace of Shivappa Nayaka in Shivamogga is a rare piece of architectural marvel.

This region was under the Chalukyas, Rashtrakutas, Gangas, Kadambas, Hoysalas, Naiks of Chitradurga, Ikkeri, Keladi and Bidnore, Hyder Ali, Tippu Sultan, Odeyars of Mysore and ultimately merged with the Indian Union in 1947, one of the earliest to accede.

I am confining this article only up to the end of Davanagere District, as it is a vast subject and very difficult to cover at one stretch up to Tungabhadra’s confluence with Krishna.

Irrigation: On either side of Teerthahalli, there are Bhimanakatte and Virupaksha where huge stone boulders are laid to regulate the water supply during the summer.  Mythology dates them back to the days of Ramayana and Mahabharata. Several anecdotes are weaved. They are manmade and dateless. There is any number of tanks dug/built from time immemorial. After the construction of the Tunga and the Bhadra dams, some of them are utilised as balancing reservoirs.

Shanti Sagara tank @ Sulekere, in Davanagere Dist one of the biggest in Asia, built in the year 1128, irrigates 4,700 acres of land and more than 170 villages are benefited. The Bhadra Dam was built across the river at Lakkavalli, with a storage capacity of 71 TMCFT. It irrigates 5,00,000 acres, in Chikkamagalur, Davanagere, Haveri, Gadag and Bellary Districts.  Gajanur Dam across Tunga, near Shivamogga with a storage capacity of 9 tmcft, irrigates about 60 thousand acres in Shivamogga and Davangere Districts. There are innumerable lift irrigation systems, both authorised and unauthorised.

Pollution: Just as all the rivers, directly or indirectly join the sea, all surface pollution ultimately find their way into the rivers. All along the Tungabhadra and its tributaries, big and small, industries have sprung up. Pilgrim centres are attracting more devotees. Urbanisation is spreading. Untreated drainage waters freely flow to the rivers. Industries, by Law, are compelled to install effluent treatment plants before letting the waste into the rivers. Their performance is questionable.  Over and above all these, Tungabhadra riverbed is not free from the national malaise, THE SAND MAFIA. Its oft-repeated havoc need not be retold.

The region in Chikmagalur and Shivamogga districts is known as Malanadu, the Hilly Region. There are thick forests, part of the Western Ghats, and the second wildest forest range in the country. Many varieties of trees, plants and herbs are grown. This is a natural habitat for many wild animals, except lions and rodents and reptiles. One of the rarest species of reptile, King Cobra found only in Odissa and Assam thrive in Shivamogga Dist. Elephant Safari in Sakrebailu, Lions Safari and Mandagadde Migratory Birds’ sanctuary, all near Shivamogga are visited every day by hundreds of people.

Navratri and Dussehra festivals in Goddesses’ abodes, particularly Sringeri and Sivaratri in Saiva or Eswar Temples are regular features.  Apart from these, for Car Festivals, Urus in Dargas and Parish Fest in Churches, thousands of devotees of interfaith gather.

Among the legends and great men, Adisankara heads the list. Pampa, 10th Century A.D, the Adikavi of Kannada, Vidyaranya, the pontiff of Sringeri in 14th Century who established the Vijayanagara Empire, Gadugina Naranappa, 15th Century,  the writer of the most famous Kannada book, Gadugu Bharata, the grand old man of Carnatic Music Purandaradasa and  Kanakadasa lived on the banks of the rivers.

The region had produced the Chief Ministers such as Kadidal Manjappa, Nijalingappa, JH Patel, Bangarappa and the present one Yedyurappa. Gopal Gowda was Socialist Leader of National fame. Many Philanthropist businessmen and industrialists of this region are bywords. My uncle Lare Bhujangaraya Sastry was the first Photographer in the region. Starting his career in 1928, he was the official photographer of the Indian National Congress and covered Gandhiji’s visits to the region. Unfortunately, the negatives were seized by the British police.

Road transport was started by the fag end of the 19th Century. As many as  ten bridges were constructed across the rivers at Hariharapura, Balehonnur, Holehonnur, Teerthahalli, Shivamogga, Harihara, etc. The oldest one was constructed at Bhadravati in 1860 at a cost of Rs.24, 960.00. Almost all of them are intact and are part of either State or National Highways.

Food habits of the people depend upon the crops grown. The people import only a few minor items, like wheat, garlic and potato. Because of the influence and migration of a large number of people from the neighbouring Coastal Karnataka, coconut oil is also used for cooking. Even Telugu Kavisaravabhouma Srinatha had praised them.

As there were many cotton, ginning and weaving mills, Davamnagere was once known as Manchester of Mysore. Now it is the Oxford of Karnataka. Originally established in 1915 by the Maharaja of Mysore, when Sir M Visvesvarayya was the Diwan, Central Coffee Research Station at Balehonnur, Chikamagaluru, under the Union Ministry of Commerce and Industry is the only one of its kind in the country.  Dr Surya Prakasa Rao of Guntakal in Anantapur Dist and a product of the prestigious Silver Jubilee College, Kurnool is its present Director.

Pushkaralu is not an instant event. It is a 12 years cycle.  Now we know that the next Tungabhadra Pushkaralu will occur in 2032. Governments at the Centre and the states, local bodies, heads of religious and tourism cetres and NGOs must launch the activities right now. Particular attention must be bestowed on prevention sand mining and preservation of flora, and fauna. They are the heart, brain, kidneys and the lungs of a river.

(KC Kalkura is an advocate from Kurnool, Andhra Pradesh)

Tracing the History of Kurnool’s Once Popular Kalkura Udupi Hotel