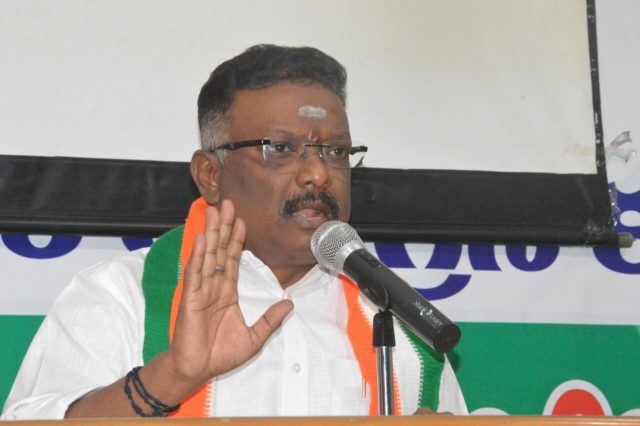 Hyderabad, March 01, 2021: AICC national spokesperson Dr Sravan Dasoju on Monday spewed fire at KT Rama Rao (KTR), Minister for Industries, IT, and Municipal Administration, for his theatrics on the prestigious Information Technology and Investment Region (ITIR) project ahead of the Graduate MLC Elections in Telangana.

He criticized KTR, who, he said, was resorting to woo the Telangana Graduates’ for votes for TRS Party’s candidates through colourful Twitter gimmicks.

According to Sravan, “the graduates are intelligent enough to identify the true colours of the minister, who always lies on employment numbers and depends on fabricated figures”.

The Senior Congress party leader declared that KTR had no moral right to seek graduates’ votes in the state and reiterated that the Congress party would fight until the last vacancy (1.91 lakh government jobs are currently vacant as per Biswal Commission) is filled up by the government and regularize all the 1.20 lakh contract employees in Telangana.

He slammed the government for not evolving a proper employment policy and not coming up with notifications for DSC, Group –I, Group –II notifications that would help the BC, SC and ST community.

Addressing a press conference at Gandhi Bhavan today, Dr Sravan Dasoju disclosed the facts about the ITIR project and NIMZ and slammed KCR and KTR for the lack of sincerity in retaining those prestigious projects.

“On many occasions,  and also on the floor of Assembly, KCR himself said that the ITIR, NIMZ and Pharma city were the dream projects, and they would change the landscape of Telangana industries while ensuring millions of employment opportunities for Telangana youth. But, neither KCR nor KTR sincerely tried to retain those prestigious projects,”  he added.

According to Dasoju, no single MP of the TRS had ever raised a question on them leave alone stalling the parliament to protect the interests of Telangana youth.

“However, KTR wrote a letter in 2021 asking the Union IT Minister to sanction an alternative scheme, after the centre had shelved these projects. This shows utter callousness on the part of the IT minister,” Dasoju said.

Sravan wondered as to why KCR is asking for the alternate scheme in the place of ITIR.

“This clearly demonstrates that KTR has no commitment towards ITIR and no conviction to provide employment to the youth of Telangana,” Dasoju said.

Dr Sravan accused that the nexus between the TRS party and the BJP  is the primary reason for scrapping them forever.

“KTR is trying to present the Modi-led government as the culprit of the ITIR project for obvious reasons. But, the same Modi government didn’t even approve of the so-called major lift irrigation project – Kalashwaram – for which KCR borrowed Rs 4 lakh crore. When the government has spent over Rs 1 lakh crore on the Kaleshwaram project which could not provide water to even a single acre of new ayacut, why can’t they spend just Rs 13,000 Crore for the ITIR project which has the potential to provide 15 lakh jobs directly and as many as 53 lakh jobs indirectly?,” Dasoju Asked.

According to Dr Sravan, it was the regime of Congress and the TDP that was responsible for IT growth in Telangana as 90% of the companies and employment was created when these parties were in power.

The senior Congress party leader recalled that the ITIR project was announced and DPR was finalized in 2013 under the leadership of the then Prime Minister Manmohan Singh. “About 6,000 acres of land was kept under the possession of APIIC for taking off of the project. However, with absolute negligence and sheer arrogance, the father-son duo has spoiled abundant employment opportunities for the Telangana youth. Similarly, the Gaming and Animation city, which has immense creative job opportunities as the Oscar Award-winning movie “Life of Pie” graphics were also done in Hyderabad. There has been no progress at National Investment and Manufacturing Zone (NIMZ), Zaheerabad due to the failure of KCR and KTR,” Dr Sravan criticized.

By setting aside all the political equations and for the benefit of over 40 lakh unemployed youth of Telangana, Dr Sravan demanded the immediate implementation of ITIR with state funds and offered to extend their support to the Telangana government, if it would ground the ITIR project.

He also assured that Mr. Rahul Gandhi, Vice President, Congress party along with its MPs can fight on the Union Government and Prime Minister, Modi, to secure the necessary import and export incentives, tax exemptions and other benefits.

He asked the minister to immediately initiate the process as the state government can afford to invest a paltry sum of Rs 13000 cr, the capital required along with offering the tax benefits to the industries.

He also requested the Telangana Graduates to give them at least one chance to fight on behalf of them as the Congress party MLC Candidates Ramulu Naik and G Chinna Reddy are the true sons of the soil.