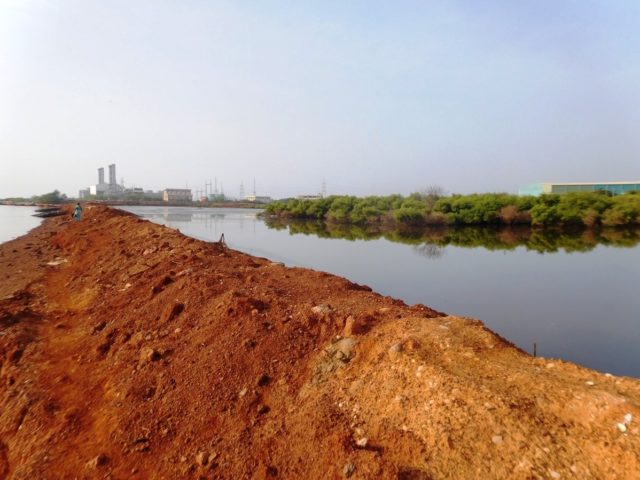 (This is the text of the letter written by Dr EAS Sarma, a retired IAS officer, to C K Mishra, Secretary, Ministry of Environment, Forests & Climate Change (MEFCC), Govt of India on the destruction of Mada forests near the port-town Kakinada, East Godavari district, Andhra Pradesh. Dr Sarma has been fighting for the preservation of the Mada forest for over two decades. He was responsible for the shifting of a thermal plant, proposed by a Congress MP then from Machilipatnam to somewhere in Nellore. Now, he is fighting against the onslaught unleashed by the present government led by chief minister YS Jaganmohan Reddy on the ecologically sensitive Mada forests in the district. The public-spirited former bureaucrat from Vizag has joined the chorus with the local environmental activists to raise voice against the destruction of Mada forests. Here is the letter he wrote to union MEFCC while forwarding the appeal of a local activist K.Mrutyumjaya Rao).

I forward here a letter I have received just now from Shri K Mrutyumjaya Rao, an environmentalist from East Godavari District about the damage that is going on in the case of the mangroves and the mudflats near the LNG terminal being set up by GMR Holdings near Kakinada in East Godavari District.

Shri Mrutyumjaya Rao has prepared a “destruction report” with pictures showing the vandalism that is going on at the site. These mangroves and the mudflats are a natural heritage that, once destroyed cannot be revived.

Already, there is a case pending before NGT on the damage wrought to another stretch of mangroves near Kakinada, where the local officials themselves are the perpetrators of the offence, as they propose to divert the land for house-sites for the poor.

Enclosed is a copy of the statutory Environment Clearance (EC) issued by MEFCC vide F. No. 10-30/2016-IA-Ill dt 7-3-2019 for the proposed LNG import facility being set up by GMR Holdings. The EC is a valid subject to several conditions being fulfilled, one of them being

Apparently, GMR Holdings have violated the above condition.
Another condition is that the project promoters should not only submit six-monthly compliance reports to MEFCC but also upload the same at their website. As on date, the GMR website does not disclose any compliance report.
The stretch of the mangroves and the mudflats reported by Shri Mrutyumjaya Rao as being damaged seems to be in close proximity to the site where GMR Holdings are setting up their project. They may or may not have been instrumental in damaging those mangroves. A site inspection alone will reveal the facts. Whoever is responsible should be brought to book.

What concerns me in this connection is that MEFCC should act as a passive spectator when a company is wantonly violating the conditions precedent to the EC granted by the Ministry, that too when such violations are wiping out precious mangroves and mudflats that host exotic migratory species of birds. India is a signatory to the international convention on migratory species of birds. MEFCC should, in the normal course, feel concerned about such violations.

Another glaring failure seems to be that MEFCC’s own Regional Office at Chennai, The State Forest Dept, and APPCB, who are expected to monitor compliances, should remain spectators to these statutory violations.

May I appeal to you to issue urgent orders to the concerned to stop interfering with the mangroves and the mudflats?

I request both the State Environment Dept and MEFCC to order an independent investigation to fix responsibility for this act of destruction of the mangroves and the mudflats.

At the outset it is observed dredging is going on near GMR plant opposite to Coast Guard office Kakinada around the lat- longs 16 o 57’ 10.75” N, 82 o 16’ 20.60” E. The dredging mud is being used to fill the Mangrove/mudflat by making a bund around of it approximately an area of 40 acres near GMR Plant. Which also affects the entire nearby mudflat. The place is an important part of a remnant mudflat for the endangered species (IUCN list) Great knot the migratory bird and to the vulnerable species (IUCN listing) Indian Skimmers pertaining to India and also with a very good number of different species of waders, Gulls and terns.

The original mudflat is very large nearly 2 square K.M around Kumbhabhishekam Temple including 7th berth of the port its surroundings and to GMR Plant surroundings. This area
harbors large migratory bird groups different species of Waders, Gulls and terns including Great Knot and Skimmers than any other mudflats of the Coringa Sanctuary, including 400 to

500 numbers of Great Knot and 200 to 250 number skimmers. In view of this exceptional congregation of the Great Knot and Indian skimmer this area became a most important habitat
for birds.

The main bird congregation is the 7th berth area about 1 square km has been destroyed/disturbed due to the expansion of 7th berth of Deepwater port. The birds last the main portion and shattered. About 100 birds of Skimmers around 100 numbers of the great knot and other different species of migratory birds are continuing around GMR plant mudflats.

In view of the importance of these birds and India is a signatory of Convention of Migratory Species, During February 2020 an International Conference ‘COP 13’ was held at Gujarat on conservation of CAF (Central Asian Flyway). India lost its major part of wetlands and mudflats severely affecting the migratory species. The Coringa Wildlife Sanctuary is in CAF is also under stress losing its mudflats and their associates for both feeding and resting.