Amaravati: A Public Interest Litigation has been filed before the  High Court of Andhra Pradesh challenging the alienation of the land belonging to the Regional Agricultural Research Station (RARS) Nandyal by Bojja Dasaratha Rami Reddy and others.

The case has been listed for hearing today.

Bojja Arjun Reddy, counsel appeared for the petitioner and the State except for Respondent No. 6, being RARS was represented by Additional Advocate General, P. Sudhakar Reddy.

At the very beginning the  Addn. AG expressed surprise how a PIL could be filed challenging the decision to construct a Government Medical College. 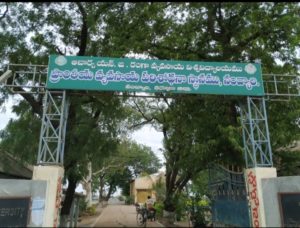 The High Court observed that the decision to construct the Government Medical College needs to be commended and enquired as to why the petitioner had sought to oppose the same.

The Counsel for the Petitioner, Bojja Arjun Reddy, stated that they would wholeheartedly welcome the decision of the Andhra Pradesh Government to construct a government Medical College at each district headquarters.

He, however, stated that it need not be at the expense of an agricultural research centre more specifically a centre which had such a storied history as RARS, Nandyal.

Stating that the famed institute was established in the year 1906, petitioner’s counsel sought to draw the attention of the court that this particular research station had contributed immensely for the development of the seed industry at Kurnool and was contributing more than Rs 1000 crores to the economy on account of its activities.

He, further, observed that it was surprising that while Telangana State after the state bifurcation was investing hundreds of crores to make the state a seed hub, the Government of AP was keen on destroying the institute which played a key role in the development of the seed industry in Andhra Pradesh.

The Additional AG interjected stating that the vacant land at RARS was being sought for the establishment of the Government Medical College and being government land it was a policy decision that could not be addressed through litigation in court.

Arjun Reddy, the counsel for the petitioner submitted that it was not vacant land but farmland on which research was being conducted and, “Nucleus seed” on which the state had a monopoly and could not be labelled vacant land.

In fact, the petitioner’s counsel sought to draw the attention of the court that the G.O which was issued in contravention of the land policy of the state government as well as the standing instructions issued by the Board of Revenue.

Further, it was submitted that there was enough and more vacant land available around the site which could be alienated for the establishment of the Medical College.

At which point the Additional AG had vehemently demanded of the petitioner’s counsel as to how he could suggest which land the government could alienate and further demanded to know how the land on which no building exists could not be treated as “Vacant Land”.

He further questioned the Petitioner on how the land belonging to RARS without any building could not be treated as Vacant Land.

The Petitioner’s counsel responded by saying that the letter by the Additional Director of Research of RARS was instructional as his letter to the Tahasildar wherein he categorically stated that “land with no buildings could not be construed as vacant as it was being used for conducting research etc”.

At this point, the bench requested the counsels not to indulge in cross arguments amongst themselves.

The Additional Advocate General has sought two week’s time for obtaining the government’s instructions and the same was granted by the Hon’ble Court. The case is now posted for hearing in two weeks apart from instructing the Petitioner’s counsel to take out a personal notice to Respondent No. 6, the Regional Agricultural Research Station.