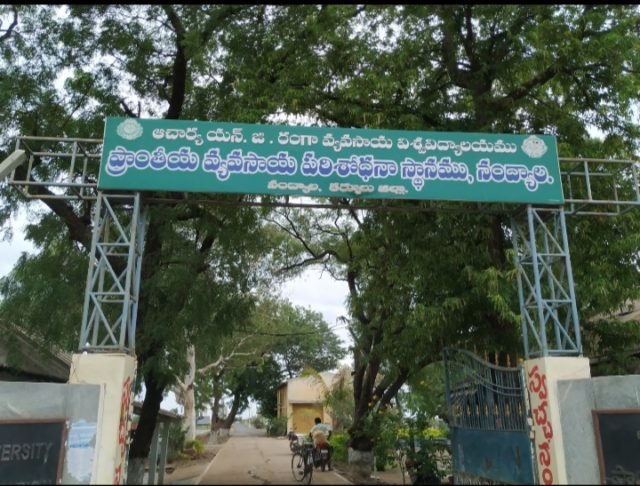 Standing on the shoulders of giants (Latin: nanos gigantum humeris insidentes) expresses the meaning of “discovering truth by building on previous discoveries”.

This tenet has been traced to12th century and attributed to Bernard Chartres. Its most familiar expression in English is by Isaac Newton in 1675: “If I have seen further it is by standing on the shoulders of Giants.”

Hence while making the new trials in any discipline wholesome planning, with backtrack is necessary.  Many experiments are being made in the innumerable laboratories and research centres in the country.

Experiments made in the age-old traditional crops still continue. Many of them are centuries old.

RARS,  Nandyal, the headquarters of Scarce Rainfall Zone, was initially established during February 1906. Located in a sprawling 110 acres of land at Nandyal. It is considered as the oldest Agricultural Research station in the state of Andhra Pradesh as well as in the country, mainly working for the improvement of the cotton and sorghum crops.

Later, during the 1950s, this station became the headquarters of the State Cotton Specialist and thereafter it was designated as Cotton Research Station in 1954.

During the year 1980 under the National Agricultural Research Project (NARP), the state was divided into seven Agro-climatic zones and this research station was named as RARS, as headquarters for Scarce Rainfall Zone.

The goal of the RARS is to develop and protect economically viable and eco-friendly productive technologies after enhancing the productivity of mandate crops Viz. Cotton, sunflower, sorghum, foxtail millet, chickpea, tobacco, and RICE.

A Hindi Poet, Bharat Vyas, wrote in a different context. “Maati hi Odan, Maati Bichavan Maati ka Tan Ban Jaayega”. (“A Typical man of 70 kg. is made up of 43 kgs of Oxygen, 16 kgs of Carbon, and just I gram of silicon.  Yet he cannot do without this little grain. Without it, his skin would suffer, his bones lose strength. He needs to take in anywhere between 5-20 milligrams of silicon per day and most, if not all of it comes through diet.”) (Gandhiji was right  – “Eat brown rice and high grain cereals. And I like the idea of beer as a silicon supplier)”    (How silica helps plants grow, flourish,  The Hindu, MARCH 24, 2011)

AP cabinet’s decision and the consequent issuance of G.O.MS.No. 341 Dated: 12-11-2020. REVENUE (LANDS.VII) DEPARTMENT  to alienate 50 acres of land belonging to RARS at Nandyal to establish the proposed Medical College in the town has evoked concern among both farmers and the scientific community.

There are allegations that real estate developers, including politicians, have sinister designs when it comes to lands around the institute. Allegations give credence, as, except Communists, no other political party is opposing the move.

Speculation is rife that once Nandyal is made the district headquarter and a Medical College comes up there, real estate prices of the town will go up. The District Collector has already given his nod for the alienation of 50 acres from the RARS land.

What is intriguing is the surreptitious nature of the G.O. Nowhere RARS is mentioned; only the Survey No. is quoted.  It is deceiving. ANGRAU, the owner of the property is nowhere in the picture.

RARS at Nandyal has been making rapid strides in developing new varieties of seeds that can withstand drought conditions, as well as an excess of rains and improve yields.  New seed varieties of Green jowar NJ 2646, white jowar NJ 2647 were released during the year 2018-2019. Medical College at Nandyal is a proposed one. In the name of development disturbing the existing reputed functioning institutions is a fraud on development.

Renowned Kannada writer and Social activist, Kum. Veerabhadrappa (Kottur, Ballari Dist, in Tungabhadra basin) expresses concern: “British had built some institutions after strenuous studies. While establishing the RARS at Nandyal, they must have, carefully taken into consideration so many factors, namely;  weather, soil, water and manpower, traditional crops in and around, transportation and marketing, etc.

Nandyal being in the Arid Zone and served with the Tungabhadra and the Krishna waters is the right place to make research on agricultural products, both irrigated and dry land.  Therefore the Govt must acquire another one hundred acres and develop it into International status.

Instead, it wants to acquire 50 acres of land for a Medical College. A new Medical College can be set up anywhere. But not an ARS. If it still wants to shrink the activities of RARS, it is a fraud on the agricultural sector. There is no wonder if the farming community raises alarms.”

In 1906, Nandyal was just a small, six-year-old Municipal Town. The railway line was laid in 1890. The population must have been around 10,000. There was only one High School; S.P.G.High School. Ii was not in the limelight. The National Movement was yet to spread.  Imagine the forethought of the founders.

To my knowledge, there is no other institution of RARS’s dimension in the Krishna River Basin. The people of Rayalaseema are demanding to shift the Head Office of the Krishna River Management Board (KRMB) to Kurnool. Along with many other Technical and Scientific institutions in Kurnool Dist,  RARS is the most suitable institution to launch extensive studies and further research on the agricultural front. There are about 25 scientists engaged in the pursuit of excellence in their respective disciplines. The number of Technical Assistants and Ministerial Staff, respectively are 25 and 40. In all, there are about 40% vacancies. There are 250 farm laborers in the experimental farms. Most of them from four generations since 1906. When about half the land is gone, in all probabilities 50% of the farm laborers will be thrown out of employment, and research activities shrank.

The administration is assuring them alternative employment in the Medical College. A new establishment is an opportunity for additional employment and not for alternative appointments. The nature of employments in agricultural farms and Medical colleges are poles apart. Newcomers, in their 20s, may be able to learn the offered job. But the majority of them, both men and women, past their forty may find it hard to adjust to the new area.  Opposition to the acquisition of the RARS land shall not be construed as a negative approach to the Medical College.

Nandyal is not a desert. A Medical College can be established even in a desert, provided the Administration wills. There are vast Govt and private lands suitable for establishing the Medical College. It is well and good if it can secure 50 acres of land. But the land requirement for establishing a Medical College in the Urban area is 15 acres and 25 acres in the rural area. If it finds it difficult to find land in the urban agglomeration, the Nandyal Municipal  Limits can be extended. If the area is a little bit away from the Town, transportation is not a problem. Link Auto rickshaws are available in plenty. APSRTC may be asked to ply City buses. Private operators also may come forward. It is an opportunity for a new colony to develop. Age-old Educational Institutions, including the Medical Colleges, may be in the midst of the towns and cities.  But, when established they were in the peripheries. even in God-forsaken places.

As stated in the beginning research is a continuous process. The dedicated scientific community, for over a Century, has regularly carry on many research and experiments in RARS, Nandyal.

There are two outstanding and long-standing contributions. B.P.T. 5204, popularly known as Samba Mahasoori or Sona Masoori or Kurnool Masoori, a rare, tasty, and popular variety of paddy is grown all along the Tungabhadra river basin in Karnataka, Telangana and A, P.

In popularity, it stands second to Basumathi in India. It has a global market; particularly wherever there is S.Indians’ concentration.  It is available in all the Indian Stores abroad, in bags of, roughly 10  and 20 K.gs. It is a foreign exchange earner.

Prof. M.V.Reddy- (D.O.B.October, 3,1929 -DOD.23rd April 2014) of the Agricultural College, Bapatla, Guntur Dist. one of the oldest in the country, affiliated to ANGRAU, Hyderabad, A.P. had made in-depth studies on the variety in the 1970s. A failure in coastal Andhra, the experiment at the Century-old RARS, Nandyal was an instant success. Further experiments and research yielded the desired results. These days the legacy is carried to Coastal Andhra too. It is estimated that during the 2007-08 Crop season A.P. has grown about one crore and 33 lakhs of tons of rice and the lion share is that of the Masoori, about sixty lakhs of tons.(Eenadu Dt. 11th May 2009, article by   P.V.Subbaiah Choudary.) Later Dr, Reddy became the Principal of the Bapatla Agricultural College and retired in 1989 as Associate Director of the RARS, Tirupati.

Another worthy research product of the RARS is NARASIMHA COTTON SEED. It was a developed new cotton variety which is used as a parent line for cotton hybrid seed program. The hybrids made of Narasimha are cultivated in over 10 million acres contributing a tax amount of Rs 3 billion on the sale of cotton and seeds. Narasimha and nine more varieties of cotton seeds were the strenuous efforts of Kaderbad Ravindranath. All these varieties were released and notified by the Central Variety Release Committees of the Indian government. Kadarabad served in RARS  for 36 years from 1959 to 1996 in various capacities. Participating in National and International  Seminars, winning laurels and prestigious Awards, he published more than 60 scientific papers in National and International Journals on different topics pertaining to Cotton.   He is the son of Kadarabad Narasingha Rao, a philanthropist and three-time Chairman of Nandyal Municipality. NARASIMHA was evolved in the mid 1990s. Then Sri P.V.Narasimha Rao, the Prime Minister represented Nandyal Lok Sabha Constituency. It is a tribute to two giant Narasimhas.

Because of the Pandemic, the agitation by the farmers may be weak. The Govt may, with an iron hand suppress the agitation. But farmers will certainly demonstrate their power through the ballot box. By that time, irreparable damage may have been done. Let the Govt honor the commitment of the founders.

(KC Kalkura is a advocate from Kurnool, Andhra Pradesh)