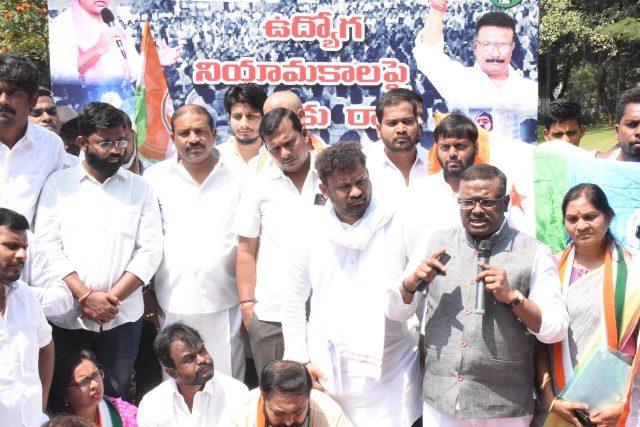 Hyderabad, February 26, 2021: AICC Spokesperson Dr Sravan Dasoju  Friday blasted KT Rama Rao (KTR), Minister for Industries, IT, and Municipal Administration, for not showing up  for the open debate over the unemployment situation in Telangana.

The debate was to be held at Telangana martyrs memorial opposite Assembly.

The senior Congress leader criticized the Minister, for telling blatant lies on the number of jobs created in Telangana. In a meeting held at Pragathi Bhavan, KTR had reportedly claimed that 1.32 lakh jobs had been created ever since the TRS formed the government in 2014. 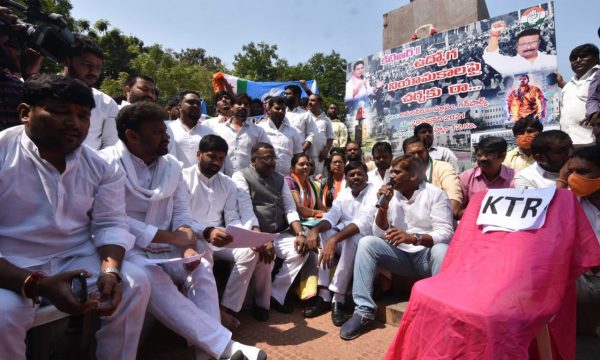 Disputing the claim of the IT minister, Dasoju demanded an open debate at the memorial. Youth and Congress workers also gathered at the venue to witness the debate between the minister and Congress spokesperson.

Dr. Sravan along with Congress party leaders and cadre made elaborate arrangements to receive KTR at the venue.

Expecting that KTR would turn up at the venue to defend his claim, Congress leaders arranged a chair and decorated it with a pink towel, as is the practice among the TRS government functionaries.

However, the minister did not turn up for the debate. The Congress leaders said KTR was scared to face the public on the fake employment figures he dished out to the media in view of MLC elections.” Though KTR agreed to a debate, he backed out once Congress disputed his figures,” Dasoju said.

“We wouldn’t have beaten you KTR, in fact, we would have greeted you with nice garlands and bouquets. Democracy is all about healthy dialogue, discussion, and debate which alone help us to arrive at concrete solutions to complex issues”, Dasoju said later.

“Like Father… Like Son. It’s shame on KTR. You shamelessly betrayed 40 lakh unemployed youth of Telangana with your fake and fabricated statement. That the TRS government had created  1.32 lakh jobs in the state ever since you came into power, was a blatant lie,” Dasoju slammed KTR.

Dasoju said the leaders of united Andhra Pradesh, who were blamed at the peak Telangana movement for the unemployment among the Telangana youth, looked better than KCR and KTR in the job recruitment.

“The then chief minister  N Kiran Kumar Reddy, who opposed Telangana, alone filled 1.10 lakh jobs and the Congress government had issued job notifications in 2006, 2008, 2012, and 2013 and filled 1.50 lakh jobs. But, now in Telangana, unemployed youth, who fueled the Telangana movement, is getting a deal. They have been waiting for the notification for almost six years and many of them are worried that they would become ineligible due to overage,” he said.

“Is Telangana formed only for your employment (4 people)? Why don’t you provide employment to our youth who have sacrificed a lot for separate statehood? We don’t want your love letters… but, we want appointment letters”, Dr Sravan asked.

“Neither this government provided employment nor encouraged entrepreneurship in Telangana. Lakhs of self-employment applications pending at BC Finance Corporation, SC, ST, and also the Minority Finance Corporation proves this fact and exposes the true colors of the ruling TRS party,” he said.