Flash news: “High Court of Andhra Pradesh has struck down the appointment of V.Kanakaraj, former Judge of the Madras High Court and reinstated Nimmagadda Ramesh Kumar as the A,P, State Election Commissioner. Relevant amendments through an Ordinance are held unconstitutional.

Details are awaited. Of course, the Govt of A.P. will appeal to the Supreme Court. It is premature to surmise the fate of the probable appeal. This is not the first set back to the A.P.Govt led by Jagan Mohan Mohan Reddy. Legal circles number them at about 50 during the last six months.

Ever since Jagan became the Chief Minister of A, P.  in May 2019, an attitude of vindictiveness and hostility towards the predecessor Government has been apparent.

It all started with the demolition of the building, Praja Vedika, meant to serve as a ‘people’s grievance cell’, the venue where Chandrababu Naidu would hear complaints of the public and hold government and party meetings.

Praja Vedika, the sprawling auditorium-cum-conference hall in Amaravati was torn down by his successor Y.S.Jaganmohan Reddy in June 2019.

But the riverside property also allegedly violated a lot of building laws, especially the one banning any construction within 500 metres of a river.

However, in the same alignment, there are many more buildings. Above all the structure was constructed at the cost of the Govt, ie taxpayers’ money.

Immediately before and after the Independence, there were discussions, both inside and outside the govt lobbies and the Constituent Assembly regarding the continuance of the British trained bureaucracy, then known as the ‘Steel Frame of Indian Administration.

The cadre was known as Indian Civil Service; (ICS). It was agreed that the administration was “His Masters’ Voice”. Whichever the Govt was in power, it obeys the govt’s orders and implements it. By and large, it has been the practice in independent India.

However, there is a marked change in recent times. Bureaucrats and Civil Servants (including the Doctors, Engineers, Academicians, Technocrats) are branded as belonging to that party and this party. In the process adding insult to injury, almost all the top ‘confident’ bureaucrats of the Chandrababu govt are replaced.

There was a major shakeup in the district administrations as well. Worst that happened was that the senior bureaucrats with the stamp of ‘confidants’ of the previous regime were totally sidelined en masse for the first time, and asked to report in the General Administration Department, (GAD) which otherwise means waiting for the post for months together. Some of them had really fair record of service, if not brilliant.

In many respects, Jagan’s style of functioning is in quite contrary to the one adopted by his father Dr.Y.S.Rajasekhar Reddy, a distinguished predecessor in the Office.

In 2004, Late YSR asked the previous Chief Secretary and the Director-General of Police to continue till their superannuation.

Some of the so-called ‘confidants’ of the Chandrababu Naidu were appointed to the ‘key positions and promoted as the Chief Secretaries, Directors General of Police, State Directors and Commissioners, Chief Engineers and Vice-chancellors.

He invited the Government’s worst enemies, the Naxalites for a dialogue. అయినను పొయి రావలయును హస్తినకు. He regaled the Assembly with Telugu poems and proverbs. Cooled down the tensions with subtle humour and fun. His everlasting smiling face was disarming even his worst enemies.

Though he imposed his opinion, he encouraged disagreement. A senior journalist, Dr. Pothuri Venkateswara Rao has the experience to narrate in his autobiography, VIDHI NAA SAARADHI (విధి నా సారథి): “One example to say that Dr Y.S.Rajasekahr Reddy had a lot of respect for the elders. TV 9 used to arrange a weekly interview with him. I went there for some weeks. It has been my habit to express my opinions frankly. So I had said regarding Rs. Two a kilo rice scheme: ‘Such schemes do no good to the state. Mark my words, Dr.Reddy garu, you will have to repent for what you are doing, after some time.’ Seriousness in my utterance was evident in my pointing finger. As per his normal behaviour, he laughed. To tell is my duty. He was not changing his opinion as per the wishes of others. It was his character. After my exit, someone there criticised my pointing finger at him and said: “What does he think of a Chief Minister. Is it the way, speaking with the C.M. How dare he is?’ After patiently hearing them, YSR told them:  ‘He is an elderly person. If he does not speak who else will advise me. It is not possible for all to be flatterers. (As later told by Muralikrishna of TV9. ” ) 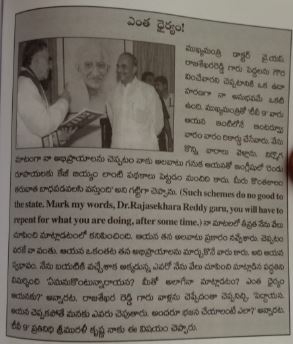 It was well known that YSR was hostile to Kotla Vijayabhaskar Reddy. I was a follower and closely associated with Kotla. However, YSR was friendly with me and had a lot of regards for me. YSR was partially responsible for the dismal failure of the Congress party in A.P. in 1994 Assembly General Elections.

Sometime after the elections, we met at Begumpet Airport. His flight to Chennai was delayed. He took me to the VIP Lounge and offered Tea. Without mincing words, for about 45 minutes he expressed, without repeating a single word, his ire against Kotla.

There was not a single demeaning word. (వాడు, వీడు లేదు, ఆయన, ఈయన ప్రయోగం) At last, he said: “Whatever it might be he is an elderly person for all of us. (ఏమయిన ఆయన మనకందరికీ పెద్దాయన.) No other person in A.P. in the near future would get the tag ‘Elderly person’ (పెద్దాయన) with his name in the near future. I am telling you all this because you are his confidant. He has no objection if you are mine too. You will tell him all these narrations. But will not add the masala. Ask him to stop hearing the carriers’ of tales.”

He came to the out gate, summoned the driver and asked him to drop me, wherever I wanted to. With a smile, I said: ‘I am on my way to Kurnool.’ ‘Oh Yes. Drop Kalkura Swamy at Kurnool. Is there enough diesel? Have you got enough money? Swamy is the boss of the hoteliers. ( I was the Secretary of the AP  Hotels Association.). He will take care of your food and beverages.

It is high time, that Jagan emulates his father by seeking advice from his father’s contemporaries and close ‘confidants.’