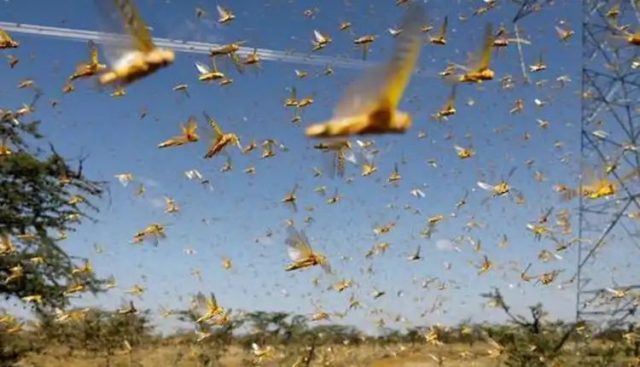 While Telangana state gets into battle mode to tackle the possible menace of locusts, Food and Agriculture Organization (FAO) issued a forecast that there may not be any threat from the locust swarms to South India.

It is widely apprehended that the locust swarms which are now in Amravati area of  Maharashtra might land in some Telangana district on their way to Chhattisgarh. So, the deal with the threat, chief minister K Chandrasekhar Rao yesterday convened a high-level meeting to put the state machinery on high alert. He instructed the collectors and other officials of districts bordering Maharashtra and Chhattisgarh to take all possible measures to drive the locusts away from the state.

Meanwhile, FAO in its latest forecast said there are fewer chances of migratory pests reaching south India. But it also warned that several successive waves of invasions can be expected until July in Rajasthan with eastward surges across northern India as far as Bihar and Odisha followed by a return to Rajasthan on changing winds associated with the monsoon.

The locust feed on all green vegetation including leaves, flowers, bark, stems fruits, and seed.

Fortunately, the extent of damage to standing crops would be limited as there are no standing crops on their migratory path. Harvesting of rabi is over across the country and the Kharif season is yet to commence.

Where standing crops such as pulses and vegetables did come under the attack of the swarms, the damage was in the range of 1 to 5 percent, officials said.

So, the forecast said Swarms are less likely to reach South India and also Nepal and Bangladesh.

The earlier report from FAO

In the past few days, there have been movements of adult groups and swarms in India, Oman, UAE, and Uganda.

SOUTH-WEST ASIA
Swarms are forming in the spring breeding areas and migrating east to the Indo-Pakistan border ahead of the monsoon rains.

India. Spring-bred immature adult groups and swarms that arrived in Rajasthan from the west continued to move east in the eastern portion of the state and to the central states of Madhya Pradesh and Maharashtra. As of 26 May, at least one swarm had reached to the northeast of Bhopal. Much of these movements were associated with strong westerly winds from Cyclone Amphan in the Bay of Bengal. Control operations are underway. Several successive waves of invasions can be expected until July in Rajasthan with eastward surges across northern India as far as Bihar and Orissa followed by westward movements and a return to Rajasthan on the changing winds associated with the monsoon. These movements will cease as swarms begin to breed and become less mobile. Swarms are less likely to reach south India, Nepal, and Bangladesh.