Despite so much talk about the research, and the trials by dozens of global biotech companies, there has been no promising drug and virus to cure COVID-19 so far.

The much talked about Remdesivir and the drugs such as Hydroxychloroquine, Lopinavir, Ritonavir, APN01 or Favilavir are being touted as potential drugs because of encouraging outcome from clinical trials.

None of these, however, have been found to be effective against coronavirus as of now.

Now, an ayurvedic compound has joined the fray. According to a report in Vigyanprasar, a collaborative study done by DAILAB at the Indian Institute of Technology, Delhi (IIT-D) revealed that the natural compounds of Ashwagandha (Withania Somnifera) and Propolis could be a potential drug candidate against COVID-19.

DAILAB is an international laboratory formed out of the collaboration between the Department of Biotechnology (DBT) and the National Institute of Advanced Industrial Science and Technology (AIST), Japan. Hence the acronym DAILAB.

The DAILAB’s study on Ashwagandha and Propolis has just been accepted for publication in the Journal of Biomolecular Structure and Dynamics. 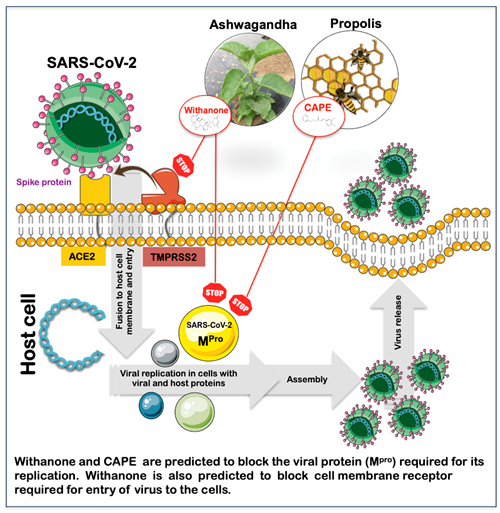 The DAILAB researchers targeted the main SARS-CoV-2 enzyme for splitting proteins, known as the Main protease (Mpro). Mpro plays a key role in mediating viral replication. This is an attractive drug target for this virus, and as humans don’t naturally have this enzyme, compounds that target Mpro are likely to have low toxicity.

The researchers discovered that a natural compound Withanone (Wi-N) derived from Ashwagandha and Caffeic Acid Phenethyl Ester (CAPE), an active ingredient of New Zealand Propolis, has the potential to interact with and block the activity of Mpro,” reported Vigyan Prasar.

The researchers have also studied the capability of these bio-actives to modulate the protein on the surface of human cells, to which SARS-CoV-2 binds and allows its entry into the human cell – the transmembrane protease serine 2 (TMPRSS2), and selected Withanone.