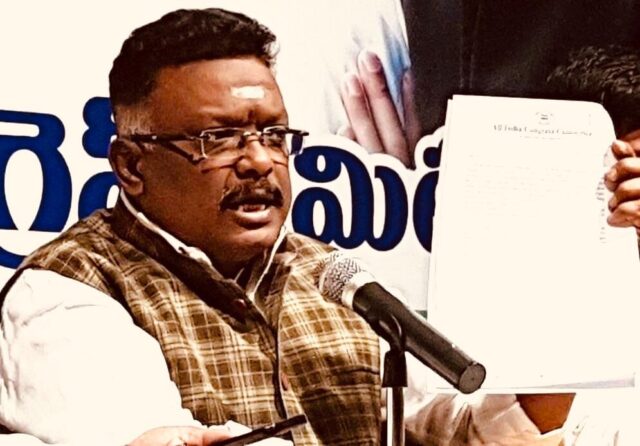 Hyderabad, October 24: AICC Spokesperson Dr Dasoju Sravan expressed severe displeasure over the Central Team which visited Telangana over the past two days to assess the massive damage caused by torrential rains and floods.

He termed it as a mere eyewash.

Stressing that the Central team had made a mockery of lakhs of people who suffered due to the recent rains, Dr Sravan wondered how could visiting officials study such large-scale damage caused by rains across the state in just two days.

“Congress party welcomed the Central team and wished that the team would tour extensively across the state to assess the large scale damage inflicted by recent rains and bring relief to the suffering people. But we are extremely disappointed to know that the Central team’s visit was a mere eyewash and a drama enacted by TRS and BJP Governments to fool people to hide their failures. How can they assess damage caused on such a large scale in just two days? And how can they arrive at the real picture, by depending on Telangana Government officials, who failed to deliver their duty when rains and floods struck people?” said Dr Dasoju Sravan, speaking at Gandhi Bhavan on Saturday.

“KCR is probably the only Chief Minister in the entire history, who did not visit the flood hit areas and did not bother to console those, who lost lives due to rains. KCR did not even take up an aerial survey. No leader from government has consoled the families of those who lost lives during the recent rain fury even till now. And the visiting Central team has depended on this inconsiderate and incompetent KCR government to assess the loss caused due to heavy rains. Instead of following the itinerary planned by Telangana government officials and speaking to those whom officials have shepherded, the Central team should have made a surprise visit and interacted with a wide section of people like the general public, opposition parties, civic society groups to get a real picture,” explained Dr Dasoju Sravan. 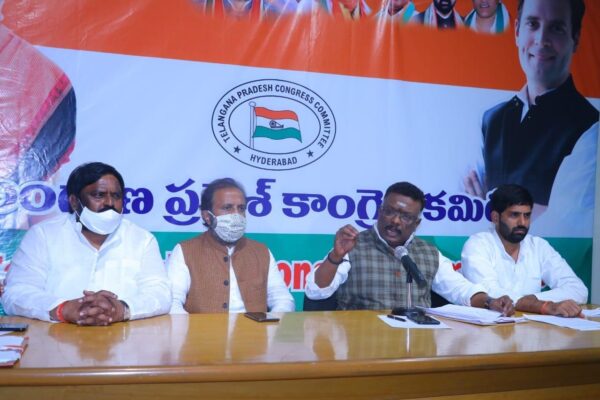 “Instead of guiding the Central team to study the ground reality, Telangana Government and GHMC officials have made efforts to hide their failures. At many places, officials have misled the Central team to hide their incompetence. For instance GHMC East Zone Commissioner Upender Reddy, South Zone Commissioner Samrat Ashok have stage-managed and ensured that the Central team got positive feedback from people about the state government’s response during the floods. The central team did not give an appointment to the Opposition party Congress, which stood by the people during the floods. Instead, the team members sat in Taj Krishna Hotel and prepared reports, according to the briefing given by Telangana officials. Is this the way the Central team consisting of senior bureaucrats assesses the damage caused to lakhs of people?” questioned Dr Dasoju Sravan.

Demanding Union Government to announce the recent heavy rains and consequent floods as a ‘National Calamity’ Dr Dasoju Sravan urged the Central team to make more visits to Telangana and speak to wider sections of people to make a proper assessment of the damage and provide relief to the people.

Speaking further on the occasion, Dr Dasoju Sravan fired on TRS Government and leaders for misleading people in the name of relief.

“The TRS Government and GHMC have completely failed in dealing with the floods. Nowhere were TRS MLAs and corporators seen during the calamity. It was only Congress and certain civic society groups and NGOs which helped people during the floods. But TRS leaders are now trying to gain political mileage by distributing money offered by the Government as compensation, as being given by them personally. CM KCR has promised to pay Rs 10,000 as compensation for every family affected during rains. But instead of giving Rs 10,000 amount as cheque, TRS MLAs and corporators are distributing much lesser amount like Rs 3000 or Rs 2000 in the form of cash. Why are TRS leaders distributing money instead of GHMC or other government officials? Why is the government not offering Rs 10,000 cheques? By offering cash, TRS leaders and corporators are trying to woo Hyderabdis ahead of GHMC polls. Congress will launch mass agitation against TRS’s misleading tactics,’ stressed Dr Dasoju Sravan.

“Still lakhs of people are in severe troubles. Hundreds of colonies are still inundated with floodwater. But neither the state government nor GHMC has taken up any concrete steps to bring the situation back to normalcy. CM KCR is trying to shirk from responsibility by announcing a paltry Rs 550 Crore to Hyderabad to take up relief and rebuilding works. Even this meager allocation is also aimed at misleading people. Among these allocations, Rs 83 Crore is meant for stormwater drains repair. Rs 59 Crore for blacktop roads repairing spreading over 200 km in GHMC. 54 Crores for the restoration of lakes. How will Rs 54 Crore be sufficient for restoration of 300 lakes, which have been encroached in the GHMC area? But Rs 370 Crore is allotted for CC Roads repairs, which do not require such amount. TRS leaders will pocket half of the allocations made for CC Roads and will spend the same amount in upcoming GHMC elections. It is unfortunate that even after such a large-scale calamity. TRS Government is working to derive political benefit and mislead people, instead of trying sincerely to revive and restore the crumbling infrastructure of Hyderabad,” said TPCC senior Dr Dasoju Sravan.

Dr Sravan also mentioned the illegal encroachments of Lakes in Hyderabad. He further highlighted how SALKAM Lake in Bandlaguda is occupied in the name of Owais School of Excellence after TRS came to power.

Earlier in the day, Dr Dasoju Sravan along with AICC Secretary Madhu Yashki Goud, Youth Congress National General Secretary Anil Kumar Yadav, former MP and Greater Hyd President Shri Anjan Kumar Yadav, TPCC Secretary Kailash wrote an open letter to the Central team explaining the ground reality in Telangana and urging them to make further visits to the state to assess the actual damage. AICC spokesperson listed several recommendations made by TPCC regarding relief measures to be taken up in the open letter.

Why We Need To Celebrate the Library Week?