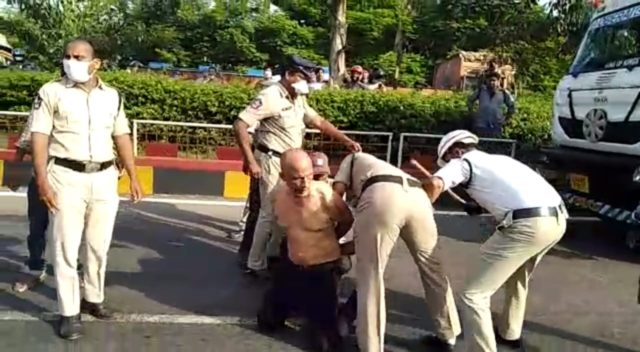 The Central Bureau of Investigation (CBI), intensifying the investigation,  has filed a case against the Vizag police on the alleged public manhandling of government civil surgeon Dr Sudhakar.

The charge against police is that he was lodged in the mental hospital only to portray him as mentally ill and sack him from the job.

Dr Sudhakar is the superintendent at Government Hospital, Narsipatnam, Vizag district. His mother Kaveribai and other family members alleged that it was a conspiracy against the doctor for talking about a lack of facilities including masks for the doctors treating the COVID-19 patients.

The CBI is investigating the case following the instructions from Andhra Pradesh High Court.

The police, who came to the hospital after they received an anonymous complaint used force to take the doctor into custody. His hands were tied behind him with ropes. And he was kicked and dragged to the police station.

After the video went viral in social media, the High Court asked the district judicial magistrate to file a report on the incident. Based on the report, which indicated a prima facie, the High Court referred the matter to CBI for a thorough investigation.

Now, the CBI sleuths visited the Mental Hospital and recorded the statement of the doctor as well as the hospital staff.

CBI filed an FIR against the police officials and public servants along with many others under IPC sections 120-B, 324,343,379, and 506 for criminal conspiracy, voluntarily causing hurt by dangerous weapons or means, wrongful confinement for three or more days, theft and criminal intimidation.

Based on the report filed by the District Judicial Magistrate, the CBI booked theft case also. The report stated the loss and theft of property including a two-wheeler, two mobile phones, car keys, wallets, and debit cards.