Government of Andhra Pradesh has announced a scheme “Pedalandariki Illu” which means houses for all the poor.  Everyone welcomed it including our Janasena Party.  But in Kakinada, officials are trying to do it at the cost of livelihood of thousands of fishermen, by destroying the pristine mangroves which are the real treasures. If destroyed, it will be an irreparable loss to the livelihood of fishermen and also a  disaster in terms of biodiversity. The absence of mangroves also exposes people to tsunamis as these mangroves act as a protective shield to the port cities like Kakinada.

It is quite unfortunate that the government of Andhra Pradesh has decided to take away these pristine mangroves in the name of allocating the land for housing for the poor.

It is clearly evident from the plan that the government wants to take away 100 acres of land by destroying the Mangroves which are protected under the National Forest Act and National Bio-Diversity Acts.

The pity is that as the removal of the chief of the state election commission, the government of AP has chosen the coronavirus lockdown time announced by the Prime Minister on March 14, to massacre the mangroves.

In this connection, the Fishermen Protection Committee, Kakinada wrote a letter on the 16th March 2020 itself to the District Forest Officer, Kakinada Andhra Pradesh bringing the facts to his notice and got an acknowledgment to it.

Therefore, now the government of AP cannot wash off its hands by stating they are unaware of the cutting away of the forest or they are busy with Corona relief activities.

Since the AP govt did not stop the activities of encroachment,  the fishermen’s representative Chodipalli Satish and other members of Fishermen Protection Committee belonging to 10th & 12th divisions Dummulapeta, Parlopeta urged    Janasena Party on March 20, 2020 for help to preserve the mangroves from the encroachment by the contractors and the authorities.

Mangroves are valuable to coastal development including prawn farming.  Most mangroves on the east coast of India have been destroyed already. Now, even though the Parliament of Indian has enacted a law to protect them, these pristine mangroves’ lands have fallen victim to the encroachment. 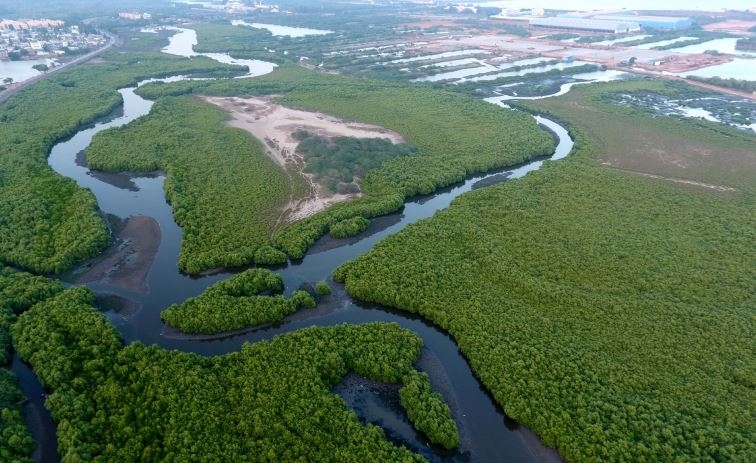 “Government is supposed to protect these pristine Mangroves in Kakinada which are part of Krishna & Godavari Mangroves from destruction. But what is unfortunate is that this responsibility is left to the fishermen who are now hitting the road violating Corona lockdown as their livelihood is at peril.

I wish to bring to the notice of the Government of Andhra Pradesh that destruction of the mangroves amounts to violation of The Indian Forest Act, 1927, The Wildlife (Protection) Act, 1972 and The National Bio-Diversity Act 2002 which are intended preserve the mangroves and their ecosystem.

Further, I wish to bring to your notice that the Supreme Court specifically mentioned the protection of mangroves in the case of S. Jagannath vs Union Of India & Ors on 11 December 1996.

In the Case of Krishnadevi Marchand Kamathia & others vs Bombay Environmental Action on 31 January 2011, the Supreme Court directed to stop dumping rubble and remove the rubble dumped already to ensure free and natural flow of seawater so that mangroves are not damaged.

We enclose the following evidence for your immediate action:

Since these Mangroves are identified as treasures and shelter for fish, shrimp, and crab breading apart from protecting the coast from tidal waves and these are specifically protected under National Bio-Diversity Act 2002. Instead of protecting them, our Government of Andhra Pradesh has resorted to destroying them in the name of housing for the poor.

Despite the letters from the Fishermen Protection Committee  to the District Forest Officer, District Collector, the destruction of mangroves has not been stopped since this activity is happening with the knowledge of your (chief minister) MLA.

Kindly look into the matter and stop all illegal activities on the lands of mangroves immediately otherwise we shall be forced to approach for legal remedies. Trust you will take this in the right spirit in which it is written and stop the activities immediately and restore the situation prevailing by removing the rubbles dumped there to avoid legal action on your government.

(Contents of the letter written to the chief minister, Andhra Pradesh on April 15, 2020)