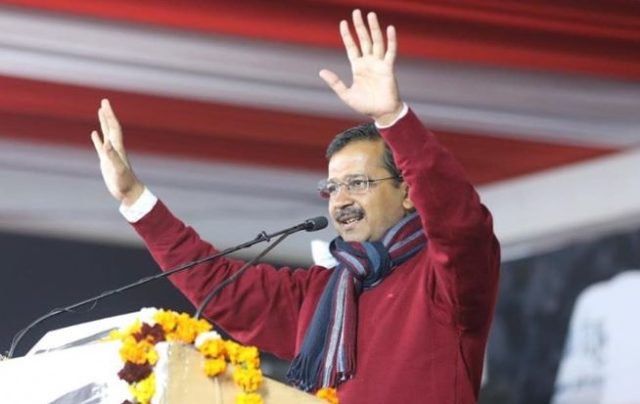 “Victory has a hundred fathers.  Defeat is an orphan ‘. Though this famous saying is attributed to former President of USA John Kennedy, it was in facto  Count Ciano, the son-in-law of Italian dictator Mussolini line who first said this great truth in 1940.

What John Kennedy observed was that many bystanders claim a share in the victory. From Sharad Pawar to, Mamta Banerjee to Tejeswi Yadav, son of Lalu , everyone made it seem as if the recent  victory of Kejriwal was due to them, at least  partially.

In India, we wait until the result is announced and then claim the victory. A lot of our citizens also join the celebrations as if they made it possible. In Delhi, everyone rushed to wish Kejriwal, while the BJP office was empty. The strange thing was that the Congress party which got zero MLAs and won only 4% of the vote was also jubilant in the victory of Arvind Kejriwal.  One might ask the Congress party that if Kejriwal’s victory was so great, why you contested all the 70 seats.

Aam Admi Party (AAP) contested the Delhi assembly elections in 2013 and got 28 MLAs out of 70. The Congress-led by its Chief Minister Sheila Dikshit was defeated and won 8 MLAs. The Kejriwal government lasted only 2 months as the Congress party pulled it down. Congress felt that without power, Kejriwal would suffocate.

In 2014, Kejriwal contested the 7 Lok Sabha seats and lost all 7 to the BJP. In 2015, Kejriwal contested Delhi assembly elections and got 67 seats out of 70, while BJP got only 3 seats. That was the electoral history of the Aam Admi Party. The latest victory of Kejriwal in winning 62 seats for a third victory is a great victory.

After forming the government in Delhi in 2015, Kejriwal adopted a very hostile attitude to Narendra  Modi and the BJP. There were a number of issues on which Kejriwal fought with the Modi government. Delhi is unlike other states as it is the capital city. Many powers are rightfully with the Government of India. The police department, Housing (DDA), the Central Public Works dept, The New Delhi Municipal Committee are directly run by the government of India. It was Kejriwal’s demand that all these powers be handed over to him like in other states. But he forgets that Delhi is also the capital of India and cannot be under the control of a rival state government.

Kejriwal waged an agitation against the Delhi Police Commissioner, the Lt. Governor, the Election Commission of India, staged Dharnas as chief Minister.   Kejriwal was in the news every day as an agitator against the Narendra Modi government.

Then came the 2019 Lok Sabha elections. Kejriwal tried desperately for an alliance with the Congress Party, saying that the anti-BJP vote should not be divided. But the Congress under Rahul Gandhi was over-confident and felt that if Kejriwal is defeated, then he would vanish and Congress would capture Delhi again in Delhi.

In the May 2019 Lok Sabha election, BJP won all 7 MPs and got 56% of the vote. The Congress came second with 22% of the vote and Kejriwal got 18% of the vote. Kejriwal was pushed to third place.  It was evidence for his complete defeat of Kejriwal in the 2019 Parliament elections.

This defeat caused a lot of introspection by Kejriwal. Remember it is a one-man party. Kejriwal has ensured that all the original founders and middle-level leaders were pushed out of the party.

One thing was clear: Kejriwal had championed Minority causes since 2013 very strongly. In that quest, Kejriwal even went to Varanasi and fought Narendra Modi in an election. Now the introspection revealed that the entire Minority vote in Delhi shifted to the Congress party. This shocked Kejriwal as he felt the Minorities owed some loyalty to him. But the Minorities shifted as they felt that the Congress was a national party and could defeat Narendra Modi.

Kejriwal had to re-think his entire political stand after Minorities ditched him. Immediately after the May 2019 Parliament elections,. Kejriwal brought about a radical shift in his behavior and policies He abandoned all the old styles and started a new chapter as he realized that he might be defeated in the coming Assembly elections.

Changes by Kejriwal since June 2019: